Why Is It Hard for Teens To Get Good Sleep? 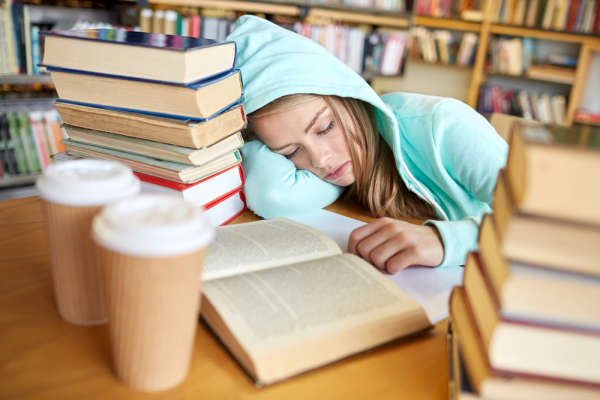 There is no single reason for sleep insufficiency among teens. Several factors contribute to this problem, and these factors may vary from teenager to teenager.

During adolescence, there is a strong tendency toward being a “night owl,” staying up later at night and sleeping longer into the morning. Experts believe this is a two-fold biological impulse affecting the circadian rhythm and sleep-wake cycle of teens.

First, teens have a sleep drive that builds more slowly, which means they don’t start to feel tired until later in the evening. Second, the body waits longer to start producing melatonin, which is the hormone that helps promote sleep.

If allowed to sleep on their own schedule, many teens would get eight hours or more per night, sleeping from 11 p.m. or midnight until 8 or 9 a.m., but school start times in most school districts force teens to wake up much earlier in the morning. Because of the biological delay in their sleep-wake cycle, many teens simply aren’t able to fall asleep early enough to get eight or more hours of sleep and still arrive at school on time.

With reduced sleep on weekdays, teens may try to catch up by sleeping in on the weekend, but this may exacerbate their delayed sleep schedule and inconsistent nightly rest.

Teens often have their hands full. School assignments, work obligations, household chores, social life, community activities, and sports are just some of the things that can require their time and attention.

With so much to try to fit into each day, many teens don’t allocate sufficient time for sleep. They may stay up late during the week to finish homework or during the weekend when hanging out with friends, both of which can reinforce their night owl schedule.

Pressure to succeed while managing these extensive commitments can be stressful, and excess stress has been known to contribute to sleeping problems and insomnia.

Use of Electronic Devices

Electronic devices like cell phones and tablets are ubiquitous among teens, and research, such as the 2014 Sleep in America Poll, finds that 89% or more of teens keep at least one device in their bedroom at night.

Screen time late into the evening can contribute to sleeping problems. Using these devices can keep teens’ brains wired, and incoming notifications can cause disrupted and fragmented sleep. Evidence also points to suppressed melatonin production from exposure to the light from cell phones.

Some teens have poor sleep because of an underlying sleep disorder. Adolescents can be affected by obstructive sleep apnea (OSA), which causes repeated pauses in breathing during sleep. OSA frequently causes fragmented sleep and excessive daytime sleepiness.

Though less common, teens can have sleep disorders like Restless Leg Syndrome (RLS), which involves a strong urge to move the limbs when lying down, and narcolepsy, which is a disorder affecting the sleep-wake cycle.

Mental health conditions like anxiety and depression can be a challenge to quality sleep in teens as well as adults. Insufficient sleep can contribute to these conditions as well, creating a bidirectional relationship that can worsen both sleep and emotional wellness.

Neurodevelopmental disorders, such as attention-deficit/hyperactivity disorder (ADHD) and autism spectrum disorder (ASD), can make it harder for teens to sleep well. Lack of sleep may also contribute to more pronounced symptoms of these conditions.

How Can Teens Get Better Sleep?

Teens who are having sleep problems should start by talking with their doctor about how much sleep they are getting and how it impacts their daily life. Their pediatrician can work to identify any underlying causes and craft the most appropriate and tailored treatment.

Depending on the cause of sleep problems, medications may be considered; however, in most cases, treatment with medications isn’t necessary for teens to get better sleep.

A beneficial step is for teens to review and improve their sleep hygiene, which includes their sleep environment and habits. Some healthy sleep tips that can help in this process include:

Sleep hygiene modifications may be included in cognitive behavioral therapy for insomnia (CBT-I), a form of talk therapy for sleeping problems that has demonstrated effectiveness in adults and may be helpful to teens. CBT-I works by reshaping negative ideas and thoughts about sleep and implementing practical steps for better sleep routines.

How Can Parents Help Teens Get Better Sleep?

For many parents, a first step is asking their teenage children about their sleep since surveys indicate that many parents don’t realize that their children are having sleeping problems.

Parents can encourage teens to see a doctor while also working with their children to make gradual sleep hygiene improvements. Some research has found that teens whose parents set a firm bedtime get more sleep and have less daytime drowsiness21.

Another avenue for parents is advocating for later start times with their local school district. A number of districts have experimented with delayed starts and found beneficial results as measured by attendance and academic performance.

Parents can also work with their teens to avoid overscheduling and commitments that can generate stress and trade off with adequate time for sleep.