Typos, repeated words and other signs of humanity in your college applications 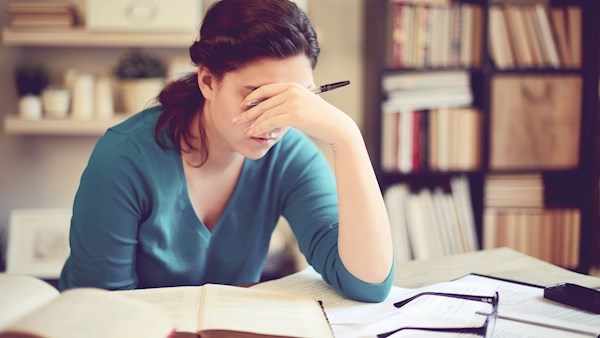 Months ago you drafted your essays, polished your application, and submitted it into finality. Now you anxiously start peeking back at your documents while you wait for the decision on the other end. That’s when you see it: the word “biomedical” repeated twice, perhaps the incorrect use of “there.” My advice could be to close your laptop, walk away from your application, and we could end the blog there. But I’m a realist–so we’ll keep going.

Here are some more numbers for you: We’ve been reviewing files for about 117 days now. That’s around 35,000 essays, another 35,000 supplemental essays, 58,000 rec letters, and one “Nicholas Cage Appreciation Club” extracurricular. But who’s counting, right?

Let’s be honest, I’m not 100% confident in all those numbers, but I am without a doubt confident about this: in thousands of decisions rendered, no one has been denied for a typo. Or the inverse: I’ve read a comment from a student on a college admission forum that hid typos in an essay to see if a school really read them. When he was admitted, he concluded that they didn’t. That’s just not how it works. (The truth: they read his essay and likely looked past the errors.)

We don’t practice gotcha! admission review. By that I mean, Admission Officers aren’t cynics looking for that one mistake, a missed point on a final grade, or that one letter that’s out of place in order to cross you off the list and move on. Actually, I don’t mind the occasional light reminder that at its core, this process is human, our applicants are human, and the function that the application serves is often more important than the form it takes.

Keep the Big Picture in Mind

In the past few months, I’ve read about some schools called Georgia Gech and been called Georgia Tech University more times than I can count. A student discussing foreign policy spelled illegal, “ill eagle” and one student (hopefully) used the wrong vowel when describing his love of math. Some were admitted, some were denied, but all those decisions were made with the bigger picture in mind.

Schools that practice holistic admission use your application as a medium to learn not only about what you’ve done but to learn about who you are and how you would contribute to campus. This is our chance to hear your voice–what are you passionate about? What drives your intellectual curiosity? Can we see you coming to campus and building on your experiences and interests to add to our campus community? When a school takes the time to comb through your applications, essays, and activities, we do so with intention and care. While we expect that you put the same care into your application, we also know when to extend grace.

Quick word from the devil’s advocate: this is not intended as your hall-pass to forgo the editing process or skip having others look over your work before sending it to us to review. That’s still an important part of the process. If you are on your own, try changing the font and printing out your essay (sometimes it’s easier to catch things in print) and reading it aloud, or copying and pasting it into a text to speech site to hear it read to you. Though not perfect, that should help you catch most mistakes. After sending, if you notice mistakes that would prevent us from understanding that bigger picture (perhaps an imperative sentence got missed when you copied and pasted from your drafts) feel free to reach out to admissions offices. If it’s just a letter here or a missed word there, there’s no need to do anything further. We get it. There’s a lot on your plate this college admission season, feel free to take this little piece of worry off it.

Be Kind to Yourself

One more time for good measure: Schools don’t practice “gotcha” admission review. When a recommender highlights an activity that a student forgot to mention, we’ll note it. When a student laments a class they just couldn’t fit into their schedule, we understand there’s only so much time in the day. Still, those aforementioned college forums are riddled with “I wish I…”, “Help! I forgot…” and various other shoulda/coulda/wouldas. We get it! This process can drum up self-reflection and subsequent anxieties you’ve never experienced before. But regardless of the decision awaiting at the end, submitting college applications is a huge achievement, and your personal growth over the past four years to get to this point is even bigger. So, it’s your turn: we extend grace- we just hope you’ll be kind to yourself too.

This blog is roughly double the length as most of those 30,000 essays we’ve read to date. Not including the title and the listing of application typos, there were four typos of my own. Did you notice them? They may have been momentarily distracting, but were you able to understand the bigger message? That’s the point. A typo in a tweet about a president’s Investiture doesn’t take away from the gravity of the day, an error in a blog doesn’t override the message, a mistake in an application doesn’t preclude admission. So, whether you’re applying to Georgia Tech, or somewhere else entirely, one mistake doesn’t erase years of hard work. We look forward to getting to know you–humanity and all.